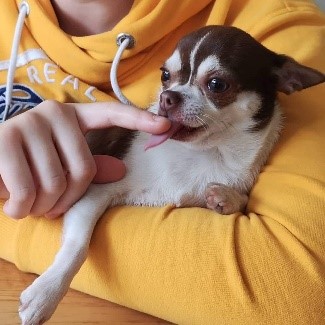 Blog written by Ann, NottsHC volunteer and the owner of the dogs pictured!

Usually myself and my group of four-legged friends visit Hopewood (our hospital for children and young people) once a week, visiting all three wards spending half an hour with each one.  Sometimes the dogs spend time with a group of young people, and sometimes they have a snuggle with the young people individually, depending on what support is needed.

This animal assisted therapy has been very popular, with many young people saying that it is their favourite activity whilst on the ward and when waiting in reception, parents/carers have commented or fed back on how much it has meant to have the dogs visit.  It’s the light in the dark.

During group sessions young people are encouraged to talk about the dogs, and just the company of the animals breaks the ice and puts people at ease. We often have conversations on life which are normally prompted by the dog’s behaviour, giving the staff chance to continue the conversation after the group has finished.

Young people are encouraged during sessions to take pictures of the dogs – these are checked and then posted on the page and they have encouraged several young people to start their own page with their pet once discharged.  One young person who feared dogs grew so attached after many therapy sessions that when discharged they persuaded their family to have a dog and started their own Instagram account.  So nice to see the benefits of animal therapy continuing for months/years after discharge.

The dogs also have an Instagram account (@houndsofhopewood) which was set up due to young people being upset at the thought of being discharged and not being able to see the dogs again.  The dogs post daily with positive messages and pictures of them enjoying life.  They have 350 followers from all over the world some of which are previous inpatients some not.

Our dogs give hope and support at a time when it’s most needed. They’re every bit as valuable as any human volunteer!

**Click here for the latest Volunteer and Carer Newsletters**