It was the Nottinghamshire Healthcare NHS Foundation Trust’s OSCARS last night. We’ve put together a few of the highlights from last night in one place. You can see the more on Twitter by following #NottsOSCARS.

Attendees were welcomed by the talented 1912 band.

We’re delighted to have the talented @The1912Band with us at #NottsOSCARS. All staff from Rampton Hospital! pic.twitter.com/eAuR1SXrFO

Staff from across the Trust turned out looking glamorous and in high spirits.

The excitement is building – can’t wait to meet our winners! #NottsOSCARS pic.twitter.com/3x4k5WDwMK

Main course finished. Much laughter round the room. #NottsOSCARS pic.twitter.com/reADSaWb8Y

There was much excitement as the award section of the night began.

First award of the night went to Brenda Hardy with the Unsung Hero Award – Non Clinical.

Our first #NottsOSCARS winner is Brenda Hardy, who has won the Unsung Hero Award – Non Clinical. She was described as a domestic goddess by the colleague who nominated her!

Innovator of the Year Award went to Wathwood for their Icebreaker Board Game.

Table five with the Oral Health Promotion Team had the best teeth AND the Team of the Year Award – Non Clinical Setting.

The Outstanding Care and Compassion award went to Sue Middleton. This was apparently one of the toughest categories to judge.

Sue Middleton was nominated by a service user who said “she is an excellent mental health nurse.” Sue is our Outstanding Care and Compassion Award winner #NottsOSCARS

We won!!!! So proud to win at the #NottsOSCARS for team of the year clinical! Well done to everyone who was nominated! pic.twitter.com/SzS9o91SaV

Eric Wilson was awarded Volunteer of the Year for his fantastic Involvement work in Rampton and across the Trust.

Congratulations Eric! Sorely missed this evening, but Max will look after your award till the next Friday meeting! #NottsOSCARS Thank you everyone for all the wonderful contribution you make. pic.twitter.com/CmodaVFKRf

There was a particularly poignant moment at the end of the night as the Chair’s Honorary Award was given to Bridget Dixon, who sadly passed away last year. Her son collected her award.

This year saw the highest number of nominations. It was a truly inspirational evening which highlighted just a fraction of the amazing work and dedicated staff in our Trust.

Last but not least, a huge thanks to those people that brought the whole event together.

We’re much more professional than that Hollywood lot! #NottsOSCARS 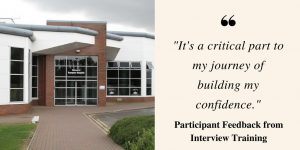